Spaceships on a Dairy Farm - What are we doing?

“What is that?” -- I’ve received this question a lot this week from people like you when they see my Instagram or Facebook post. Maybe you’re wondering too. It’s not every day that a Farmer assembles a spaceship.

OK - maybe it’s not quite as cool as a spaceship, but that’s what we’re affectionately calling the 1,500 pound lug of bolts and tar that have docked in the mother ship (or...the shop)

If you’ve been here a while, you know why we need our spaceship.

If not, you can read it here.

Thankfully, the financial climate for dairy looks dramatically different than it did on that May 26 post, but that’s just it: Dairy prices are like a volatile roller coaster you didn’t ask to ride.

So - here we are: Building Spaceships instead.

As we road-tripped into Wisconsin last Friday to purchase this new (used) ‘spaceship’, I’ll admit I found some unwelcome butterflies in my stomach. As if months of talking, planning and strategizing meant nothing, my butterflies swirled around happily interrogating my insides; “hello? Yes. It’s your butterfly speaking… ummmm, what are you doing?” “Is this really a good idea?” “Asking for a friend: Are you crazy?”

I don’t like butterflies. I mean - I like the real ones. But the stomach ones? - No Thank you.

Maybe you’ve been there too.

Not with spaceships, but maybe you’ve got your own butterflies.

Most often, we avoid butterflies at all costs. If you hate public speaking, I’m guessing you aren’t pursuing it with much gusto. If you want to make a career shift, chances are it isn’t an effortless decision. When we’re unsure about a decision, we like to tuck it away in a comfy little “deal with this later” life folder.

Or, even worse, maybe you’re “saving” your butterflies for later with a pin running through them on one of those foam boards you see at the county fair. These are the decisions that we’re avoiding so much so that we just hang it on the wall to look at it. These are the dreams that are too scary to talk about, so we just preserve them in a museum of dead things.

Museums of dead things are easier than a tummy of flutters.

But is that what we want?

Author and founder of The Strategic Coach Inc., Dan Sullivan, brilliantly explains that being confident about something is actually the reward for making the steps of commitment and courage.

In his “4 C’s” diagram, he explains that entrepreneurial dreams fizzle out if we’re not willing to first

Committing to something before you are confident about it FEELS foolish, but Sullivan argues that this is the necessary process for new ideas. 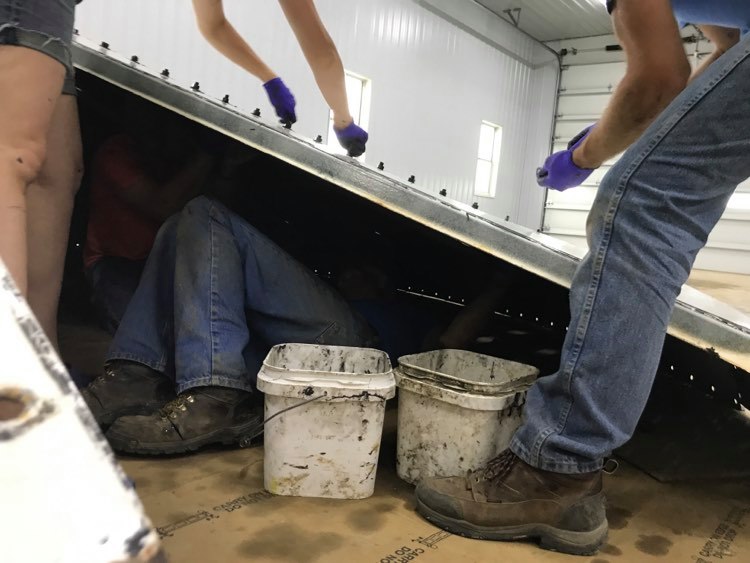 The trouble is, Courage is the next C after Commitment. Unfortunately, you don’t need courage when you’re sailing in the sunshine on glassy seas. You need courage in the presence of fear. Last time I checked, fear doesn’t feel fun.

However, Sullivan would argue that it is a necessary ingredient to produce Capability and Confidence.

I don’t like fear. I avoid it at all costs. If something sounds scary - I'm not usually the first to sign up

Maybe I should be though.

Perhaps Fear is simply the call for Courage which will lead to the Capability and Confidence we wish we had.

Maybe the underside of your fear is the thriving business or mended relationship or the restored marriage you long for.

Maybe Courage is the vehicle to get us there.

It might not look like much at first. Our spaceship didn't. I was expecting to drive up and see something impressive. Something.... big. It wasn't big: It was just a small pile of metal. What good is that?

Fear downplays the potential - "what good is a pile of metal?"

Courage dreams of what it could be.

Fear says to drive away and leave the pile behind.

Fear says - what are you going to do with that?

Courage says - let’s MAKE something with that!

I’d challenge you, like I’m challenging myself, be careful where your ear is. If Fear has our ear, we’re going to be paralyzed and lie-believing, thinking that we’re dumb.

Courage looks Fear in the face and builds a spaceship out of it.

Let's do that instead.

So what are we ACTUALLY doing?

609 bolt/washer/nut combos later, (that's 1,827 pieces on 21 panels) we assembled our new roof! As you know from our previous post, the roof to the HarvestStore silo was ruined in a barn fire several years ago. As a result, it’s a rusted, leaking, mess.

We’re retrofitting the old silo into our new farm “store” and that starts with a non-leaking roof. Rather than assembling this ship in the air, we decided to put it together on the ground and then lift it up to set it in place on the silo.

Here's a sneak peak at part of the assembly :)

Hurry up and Wait!

As farming would have it, all things spaceship are now paused while we get our second crop of hay in, so we will just dream of planets and stars for a while longer while we carry on with the real-live farming :)

Want to hear more from the Farmer's Wife? Email elisabeth.gerdes@gmail.com and just say "Subscribe" :) Or Click Here and fill out the form on the top of the page.

Want to take a Kefir Class?!